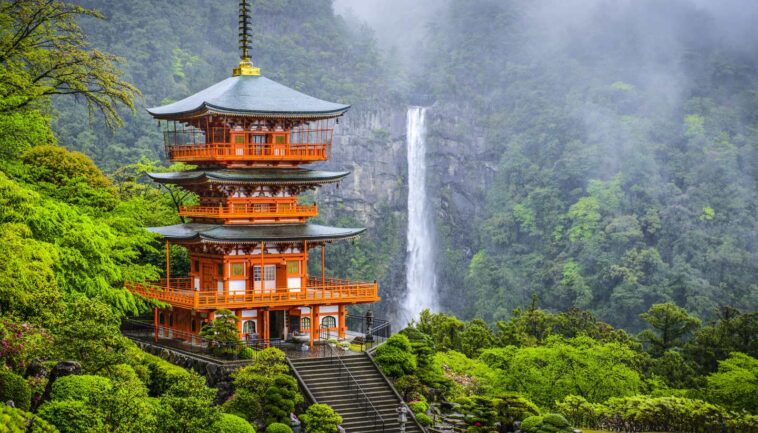 Important update Feb 2021: At the time this article was published, travel restrictions related to the coronavirus pandemic are still in place for much of the world. Please check the appropriate government guidelines for updates on where and when you can travel.

The Aichi Prefecture in Japan’s Chubu Region, home to the Toyota Motor Corporation, is known as a major centre of Japan’s automotive industry. 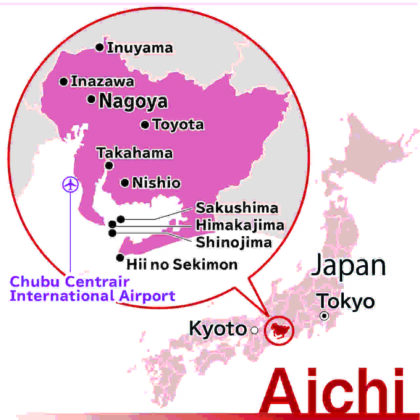 However you won’t just find a plethora of cars here – as the midway point along the old Tokaido route that linked Tokyo with Kyoto, the prefecture offers plenty of opportunities to dip into culture, history, and heritage.

The region counts hundreds of castle sites within its borders and is the birthplace of countless samurai heroes, among them three sixteenth-century daimyos (powerful Japanese feudal lords) renowned for unifying the nation.

With the help of Aichi Now, the official site for tourism in the Aichi Prefecture, here’s our “Top 10” round-up to inspire your own Japan adventure. 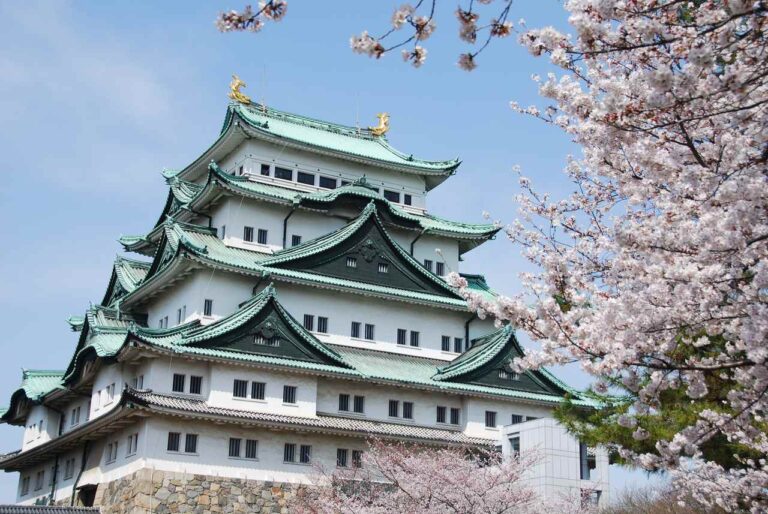 Nagoya Castle was built at the order of shogun Tokugawa Ieyasu, one of the three “Great Unifiers” of Japan. It was completed in 1615 and is Japan’s largest keep.

The castle was severely damaged in the Second World War and its towers were reconstructed in 1959. Today if you look up, this ornately decorated residence of former Tokugawa daimyos (powerful Japanese feudal lords) offers spectacular ceiling paintings. 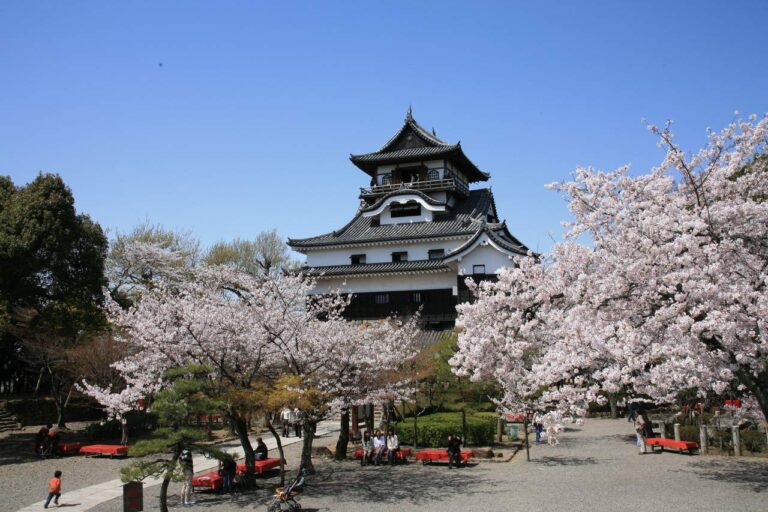 On that note, the Aichi Prefecture is also home to Japan’s smallest castle. In Inuyama the spring cherry blossoms can be photographed against the scenic backdrop of the main watchtower of Inuyama Castle, the only structure that remains of the sixteenth-century fortress. Of the 12 castles in the country that stand in their original form today, Inuyama is the smallest and one of the oldest – its current keep was completed in 1537. Though it was designed for defence and the storage of arms and armour, today it is a peaceful place overlooking the Kiso River below.

Walk amongst cherry and maple blossoms in Toyota 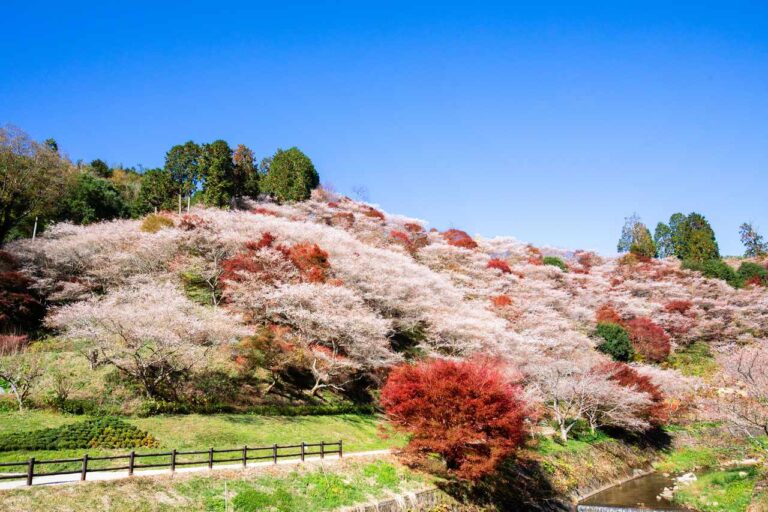 The Obara area in the city of Toyota is planted with more than 10,000 cherry trees that bloom twice each year.

The unusual sight is made up of red maples, pink cherries, and evergreens that display a cornucopia of beautiful colours and textures. As many as 300 cherry trees, called Shiki-zakura, bloom in Obara Fureai Park and its immediate vicinity from mid-March to early April and again from late October to early December. Obara is also home to Obara washi, a tradition of sturdy handcrafted paper carried on since the late fifteenth century.

“Cure” your aches and pains at Yoshuin Temple 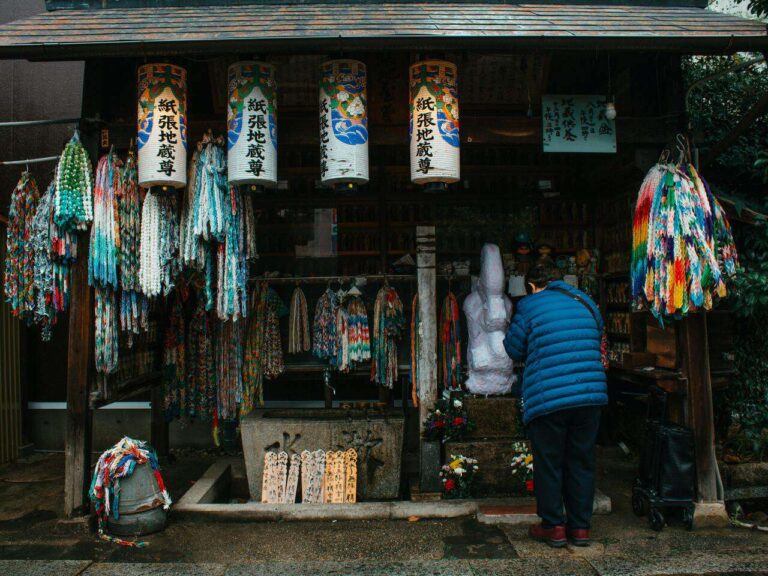 Nagoya, the capital of the Aichi Prefecture, is home to Yoshuin Temple, a tiny, hidden spot not far from the Osu Kannon subway station. It is known for its Kamihari Jizo, a stone statue of the bodhisattva of compassion that is covered in layers and layers of paper. Local legend relates that illnesses and aches and pains can be eased by first touching the place of concern on one’s own body with a prayer slip, then affixing the paper to the corresponding part of Jizo’s body. Two prayer slips can be purchased for 10 yen. 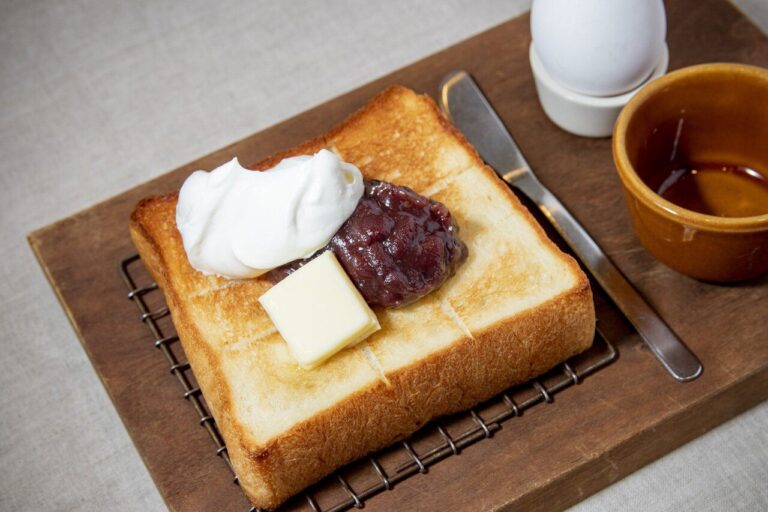 Nagoyans love to start the day with the classic café “morning service”, the equivalent of happy hour at breakfast time. For a limited period each morning, a light meal of toast and a boiled egg, sometimes also a mini salad and yoghurt, is served for the price of a coffee bought in the UK.

The bread is typically cut extra thick and toasted golden-brown. When it is topped with a pot of lightly salted butter and a scoop of sweet red-bean jam, it’s a treat known as Ogura toast – an East-West fusion that dates back to the 1920s.

Experience solace in nature on the islands of Mikawa Bay

Escape to the trio of tiny islands – Sakushima, Himakajima, and Shinojima – near the mouth of Mikawa Bay in southern Aichi Prefecture for a break from the hustle and bustle of city exploration. The islands form part of the Mikawa-wan Quasi-National Park.

Sakushima, the largest of the three, can be toured on foot or by bicycle in a couple of hours. Seek out the 22 modern art installations located all around the island, including “Hirune House” (The Nap House), “East House” and “Kamome Chushajo” (literally meaning The Seagull Parking).

Himakajima, the middle of the three isles and the easiest one to access, is famous for the anime-inspired “Heidi’s Swing” atop a hill on Sunrise Beach at the island’s easternmost tip. After you take to the sky on the swing, walk along the beach and enjoy a meal of the island’s two famous catches: octopus and fugu pufferfish.

Two 5-metre high pillars made of bamboo and sedge are planted with a sacred cork oak sapling in the centre. At nightfall, the pillars are set alight, and men who have undergone purification rites climb up ladders and into the flames, competing to tear down the burning structures in order to recover the saplings inside. It is a dramatic and heart-pounding sight to behold. 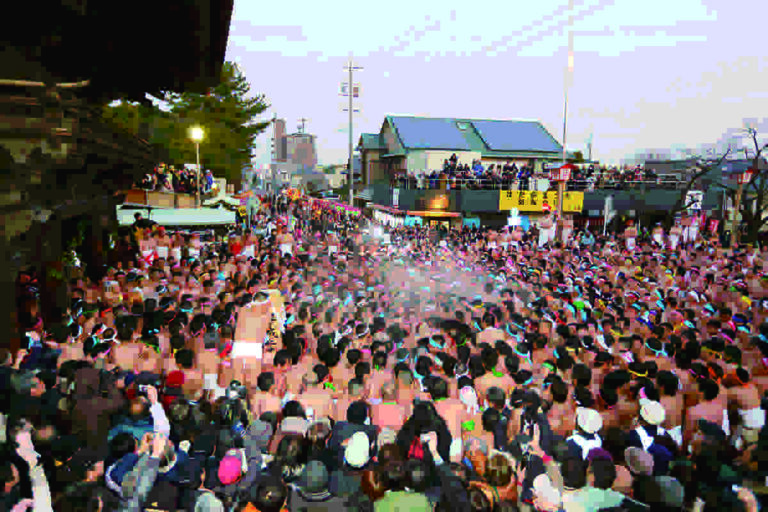 Also held in February is the Konomiya Naked Festival, which challenges the male gender in a rather different way to the fire festival. Dating back to 767, the festival involves a teeming crowd of men wearing only white loincloths and headbands who jostle each other in a bid for purification. The proceedings of the Naked Festival are typically raucous and riotous, and sake flows freely, so don’t plan anything too challenging the following morning.

Amid the coronavirus pandemic, the February 2021 event has been replaced by a modest parade.

Watch the sunrise at Hii no Sekimon 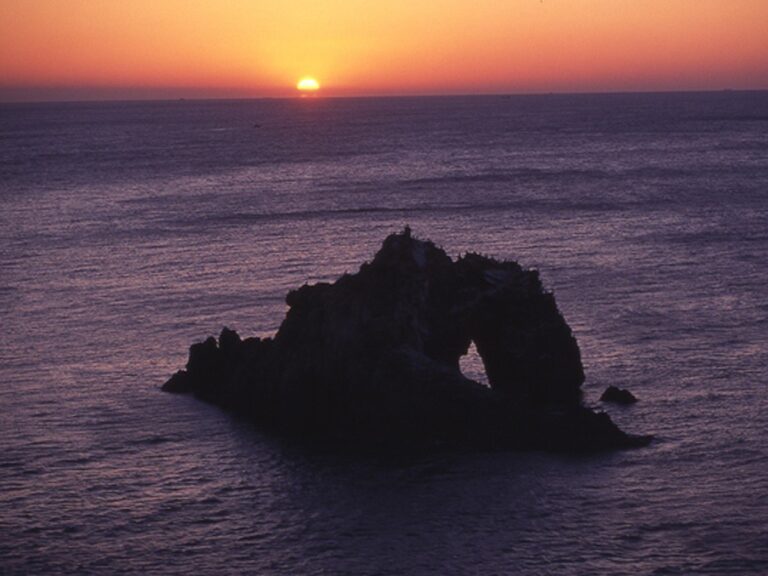 Watching the sunrise at Hii no Sekimon

The island of Shinojima is a popular spot for watching the sunset, but a lesser-known secret is to catch the sunrise a short speedboat ride away at Hii no Sekimon, a rock formation in the sea near Cape Irago at the tip of the Atsumi Peninsula.

The rock itself is the result of seismic activity 200 million years ago, hollowed out over the millennia to form a striking arc. From late October through January, its window is perfectly aligned with the rising sun when viewed from Hii Park.

Plan a foody tour of the Aichi Prefecture 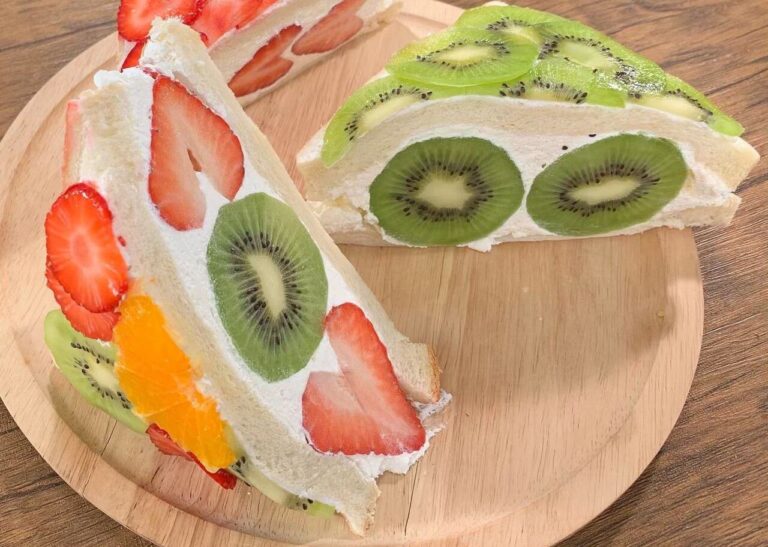 Japan is a food-lovers paradise, and the Aichi Prefecture is no exception. When in Aichi, sample the chicken sukiyaki, made with thin slices of Nagoya Cochin, a premium breed of chicken prized for its dark meat and rich flavour. The chicken is simmered with vegetables in a sweet and savoury soy-based broth seasoned with sugar and sake and then dipped in egg yolk.

For a more fruity delicacy, sample one of Japan’s famous fruit sandwiches, cut into cross-sections and anchored in whipped cream between two pillowy slices of white bread. If you are in the city of Takahama, purchase your fruit sandwich from Yaojin, a grocery store with a 120-year history. Each Wednesday and Saturday from 10 AM, they line their shelves with 30 different kinds of sandwiches including strawberries, kiwis, seedless grapes, melons, and oranges.

US: One-stop flights from the US West Coast to Chubu Centrair International Airport in Tokoname, Aichi depart from Los Angeles, San Francisco, and Seattle.

Alternatively, there are many direct flights from the US and UK to Tokyo. From there the train from Tokyo to Nagoya City, the Central City of Aichi Prefecture, takes just one hour 35 minutes. 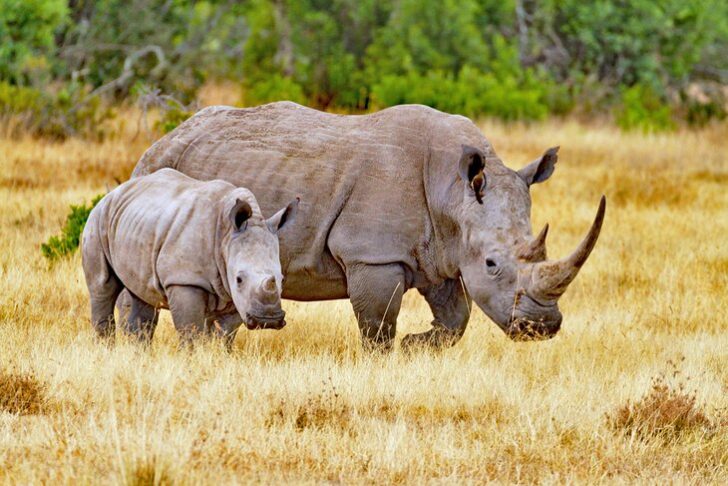 15 Best Places to Visit in Kenya 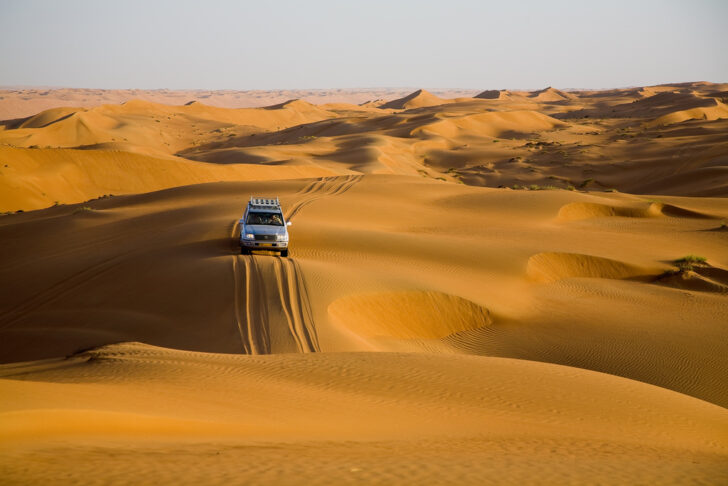 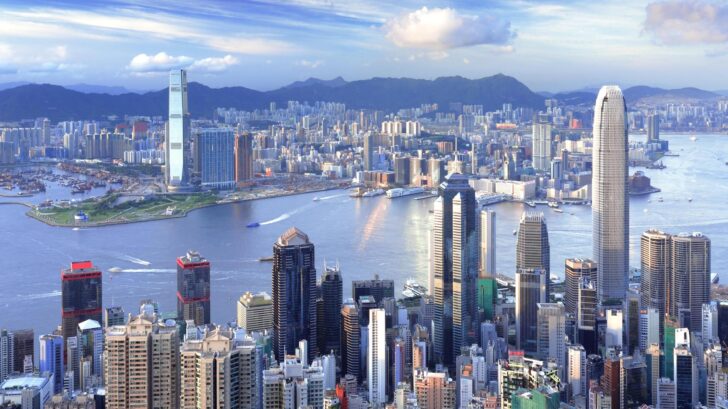 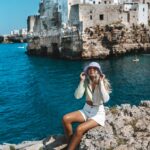 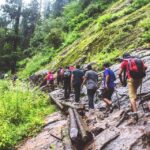