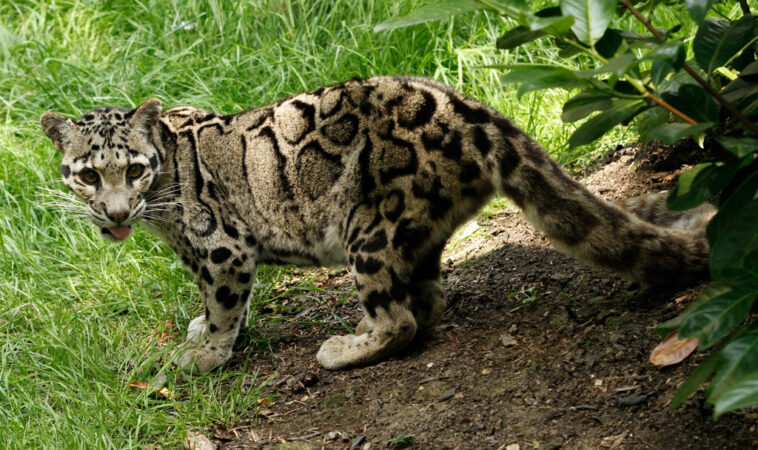 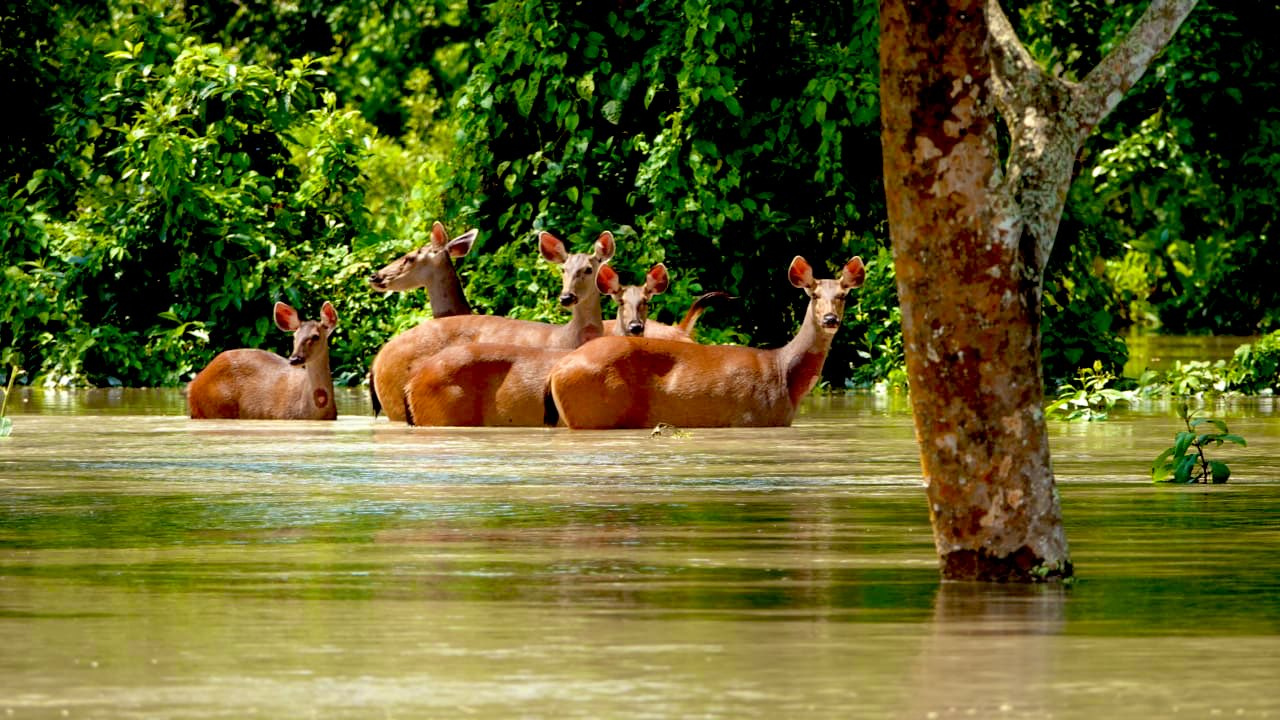 Assam’s beauty accosts you midflight- the two-hour Delhi-Guwahati flight transforming into a paean to the sun god an hour before touchdown. On this instance, Everest was visible, forcing an excited flight captain to thank our collective luck in an announcement crammed between the standard meal calls and seat-belt cautions.

I had given up my newspaper job a month ago. Assam was to be the first milestone of my new journey – and Guwahati, that great town of divine vaginal significance, the inaugural pit-stop. The Assam capital surfaced like a Tibetan wind prayer. Solemn hillocks arrived in our left, greased by the green tops of betel nut trees. From the runway, one could sense the silent business of security unfolding in the form of army choppers being fed with important-looking cargo.

It’s okay to speed in Guwahati—in a style unique to much of eastern India Overtaking from the left is considered rude but it’s fine to be slow in the right lane. Honking is acceptable. An hour later, fresh from a shower, I looked up Rhinoceros unicornis on Wikipedia.

Of Rhinos at Kaziranga National Park

The great one-horned rhino is easily Assam’s single biggest claim to fame. There are over 2,400 rhinos in the state – that’s more than 60 percent of the animal’s global population. And Assam takes them seriously. Very seriously.

According to one BBC report, rhino conservation has led to several human deaths at the Kaziranga National Park with over 20 people, mostly tribals, killed in 2015 alone. The report subsequently caused a furor with some quarters labeling the story, titled “Kaziranga: the park that shoots people to protect rhinos”, very unfair. The BBC was held guilty of “breach of trust” and, a few weeks later, banned for five years from all Indian reserves.

I was more fortunate. Despite a religious procession-led snarl doubling the journey time from Guwahati to Kaziranga to eight hours, I drove into my cozy jungle retreat the next evening amid the loud honks of bare-headed geese. Kaziranga is the culmination of one of the more revealing journeys you can make in Northeast India. While it lacks the picture-postcard feel of the Guwahati-Shillong drive, it makes up for it by offering a comparatively closer glimpse of communities living along the highway.

If you are a shutterbug with a keenness for profile shots, you will not be disappointed. By the time one enters the Kaziranga district itself, it’s time to scan the foliage. The region also happens to be, as the cliché goes, a birdwatcher’s paradise. We had stopped a short way from our halt to take in some air when a friend, going around the corner to settle a harmless business, was attacked by a needle cry.

A tiny bird, wedged between the soft branches of a dry bush, wasn’t taking too kindly to the sight of two city boys wooting about the beauty of the northeastern jungle while she probably tried to feed her babies. She let out a fierce call. Staccato. It sounded like the onset of an Arundhati Roy essay. A birdwatcher introduced her name: the great tit. A Google search revealed the following characterization: “Their twin-syllabic song sounds like a drunk pushing a rusty wheelbarrow. But the music hall stage persona ends there. Their pert, quick, neatness of form obscures a fierce nature.” Followed by: “Sexual politics in great tit society is complicated and controlled secretly by the females.”

Relieved to be back in the car before the great tit could walk her talk, we set off for our shelter without further ado. Kaziranga offers a range of stays. Most places have tie-ups with the forest department and help you book an elephant-back spot for the morning safari. But you must make the request a day in advance. Google Maps turned out to be surprisingly efficient in the area.

We reached our retreat without having to ask for directions. A welcome drink—a not-too-impressive derivative of tea probably was followed by an impressive barbecue. Our tents were very cozy but flammable. Smokers had to walk to a distance before lighting up. The toilets were convenient and hot water was available in buckets filled with strange-looking solar-powered apparatus. We roasted some chicken ourselves. Drank some rum. And went to sleep.

We were up before the manager had sent his men with cups of conventional tea to knock on our doors at 5 am. We were soon packed into a 20-year-old jalopy of a Gypsy, dark green and open hood. And off we rushed to Bagori, the entrance to the park’s western sector.

The forest department maintains a pack of some 20 elephants, all-female but one. Using them to send safari groups out into the jungle every morning. The ritual makes for an intriguing experience. If you’ve never been on an elephant ride, there’s probably no better place to make a debut than Kaziranga. The seats are more comfortable than anywhere else, a man with immense elephant riding experience pointed out. The seating takes place from an elevated platform where the elephants line themselves up politely.

The mahouts are not as fussy as you’d expect them, given the size of the rides they captain. And most, although they may lack formal training, are dependable jungle guides. Well-versed in the ways of elephants and the other four Kaziranga biggies. The national park is probably the only one in India where one finds the full gamut of the Big Five. The rhino, of course, is the highlight. But don’t be surprised if a Royal Bengal Tiger saunters in to say good morning. The elephant, the eastern swamp deer, and the wild water buffalo complete the quintet.

Rhinos, thanks to the aforementioned conservation success, are easily spotted. They are townies. They walk to the suburbs to poop and keep their towns and cities—the grazing area where they eat and mate—spotlessly green. Like most townies, they are snooty.

They keep to themselves. And at least in Bagori where they’ve grown accustomed to the morning safaris, don’t get easily exercised. Even when tourists brandish selfie sticks and chatter about demonetization and election outcomes.

As you’d have seen in photos, they appear like battle tanks. And when they do get angry, they are famous for acting like tanks themselves. A displeased rhino is known to charge at a steady speed of 40 kmph. It can upend a mid-sized car like you’d flip an omelet. After an hour in the wild, we were back to our retreat.  Here, following a sumptuous lunch, we headed to the eastern sector on a jeep safari.

The range is, again, a photographer’s delight. A tiger had slain a buffalo calf the previous evening and was waiting for the herd to clear before it could sit down for a peaceful lunch. We waited too. As it happens in the jungle so often, we’d just driven ahead to a more comfortable place for a sandwich-and-eggs snack when our guide received a text saying the tiger was out. We rushed back, egg in our mouths. It was gone. We kicked ourselves and headed back. The next morning we set off for Guwahati.

One of the highlights of our brief stay in Guwahati was the Rongali festival. Touted as the biggest of its kind in the Northeast, the two-day event showcased Assam in all her diverse splendor. Rice beer and folk dances to rock shows and adventure sports. Rongali was as much a feast for the eyes as it was for the palate. While Majuli craftsmen were available to explain how the famous masks they make come with moveable jaws. Representatives of the Dimasha and Mishing tribes talked about how they make their wooden huts without using wires or ropes. And then there was music. While the local dramatists hogged the stage in the early part of the evening. The more famous rock singers and bands were paid-for engagements. You’d have heard of Parikrama and Euphoria—they were among the more prominent acts. There were DJs too, Indian and international. All in all, the Rongali festival is a memorable experience for anyone out to know Assam. As also those willing to get a taste of not only the state’s animal kingdom but also it’s people.

Air: The nearest airport to Kaziranga National Park is Jorhat (114 km/ 2 hrs).
Rail: The nearest railhead is Furkating (98 km/1.5 hrs) with limited train connectivity. The nearest major railway stations are Jorhat and Guwahati (193 km/3.5 hrs).
Road: Kaziranga National Park is located in Golaghat, Nagaon, and Sonitpur districts of Assam. The headquarter is at Bokakhat on NH37. You can drive to Kaziranga from the state capital, Guwahati, in about 3.5 hours via NH27.

November to April is the best time to visit Kaziranga National Park. Kaziranga becomes inaccessible during the monsoon, from June to August when the Brahmaputra river floods the park. 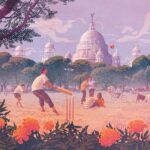 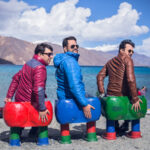